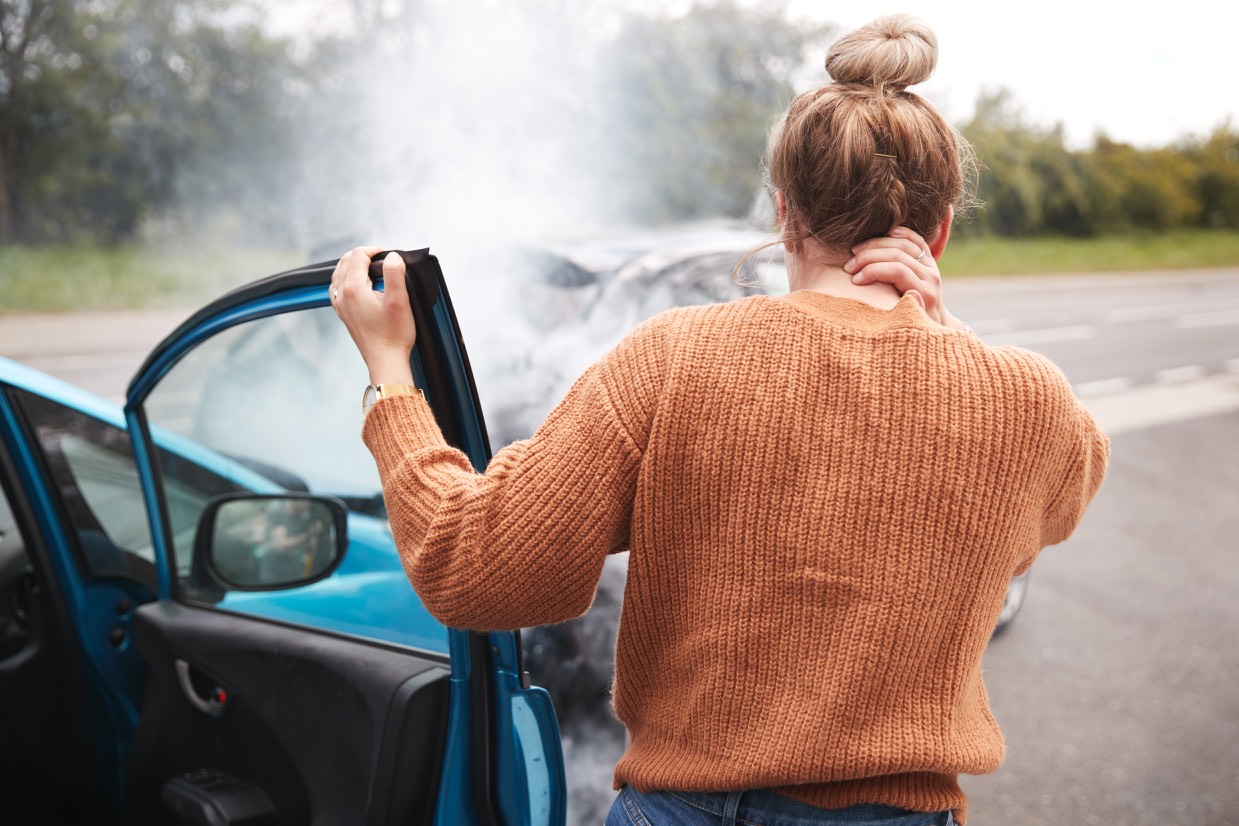 You lived through a car accident but sustained injuries that may, even now, affect your quality of life and ability to work. Just know that you’re not alone. Motor vehicle accidents injure some three million people every year in the U.S. One must also factor in the motorcyclists and pedestrians, both of whom run a particularly high risk for injury.

Below are some of the most common injuries after a car accident, whether minor or life-threatening, that people suffer in a car crash:

One can easily incur contusions (bruises) in a car accident by hitting one’s head on the steering wheel, dashboard, or side window. Lacerations (cuts) are also possible when coming into contact with these hard surfaces or with a loose object, such as a book or phone, that has gone airborne. Broken glass is behind a great many lacerations. Deployed airbags can cause both cuts and bruises.

Cuts and bruises are the most common soft-tissue injuries, the first affecting the skin and the second damaging the blood vessels. Other soft tissues include muscles; tendons, which connect muscles to bones; and ligaments, which hold the bones together. All three can be injured in a crash since the impact can cause a person’s joints and limbs to overextend themselves.

One should be able to distinguish between sprains and strains. Only ligaments can be sprained: that is, stretched or, in serious cases, torn. Usually, a sprained ligament will produce a popping noise in the joint before leading to the tell-tale symptoms like swelling, bruising, and pain.

Strain refers specifically to the stretching or tearing of muscles and tendons. The result of strain can be swelling and bruising in addition to spasms, weakness in the affected muscle, and rigidity in the affected area.

Now that we’ve established how the tissues can be harmed, we naturally move to the bones. The shoulders, arms, hips, and legs are all especially vulnerable. To start with, you could break a bone in the shoulder simply by wearing a seatbelt. It’s an unfortunate but sometimes unavoidable side effect. Shoulder bones can also break when drivers tense up their arms on the steering wheel to brace for impact.

High-impact crashes can easily fracture arms, wrists, hands, legs, and feet. That same impact may cause the femur, or thighbone, to push against the hip, breaking it and perhaps even dislocating it. Things become worse when one neglects the seatbelt and, for example, gets in a head-on collision because the whole body moves forward: The knee can break upon encountering the steering wheel, and the leg and foot can break at the footwell.

Yet again, there’s another negative aspect to the seatbelt. By restraining the torso, it can fracture your ribs. If not treated right away, the broken rib may pierce your lungs and cause other life-threatening complications. Airbags can be to blame for rib injuries as well.

This is where we come to what’s arguably the most widespread car accident injury: whiplash. It’s a particular kind of neck sprain or strain caused when the neck is violently snapped back and forth, normally after a rear-end collision. The stretching or tearing of the muscles, tendons, or ligaments can cause severe pain in the neck that sometimes extends to the upper back and shoulders. One’s range of motion will be limited, and one may even feel a debilitating weakness in one’s arms. In serious cases, one could experience:

Whiplash also encompasses injuries to the discs between the neck vertebrae. The rotational forces let loose in the crash may tear the discs and cause them to bulge or rupture in a condition called herniation. You could be alerted to this if your arms become numb, tingle, or give you shooting pains.

Another type of neck injury is a neck fracture, and unlike with whiplash, one will likely know immediately when it has occurred. It’s a frightening injury because one wrong movement could mean paralysis.

First off, spinal cord injuries arise more from car accidents than from any other incident. Just as with the neck, the rest of the spine can suffer from disc herniation or a fracture. It would be good to know that the spine is separated into the cervical spine, which composes the neck and upper back; the thoracic spine in the middle; and the lumbar spine, comprising the lower back. In serious cases, as mentioned above, a spinal cord injury could cause paralysis: either paraplegia (paralysis of the legs) after a thoracic spine injury or quadriplegia (paralysis from the neck down) after a cervical spine injury.

Besides boxers and football players, car accident victims are among the most common victims of traumatic brain injury. TBIs result from a one-time or continual jolting to the head. It’s not necessary for the head to hit an immobile object; the brain will be injured just by being forcefully moved inside the skull. Doctors distinguish between mild, moderate, and severe TBIs.

Mild TBIs, better known as concussions, may or may not involve loss of consciousness; if they do, then it lasts, as a rule, for only a few minutes or seconds (a “blackout”). Nevertheless, one may suffer greatly from even a mild TBI with some of the possible symptoms being:

Moderate and severe TBIs can cause one to lose consciousness for longer than a few minutes; it may continue for hours or even put one into a coma. Symptoms specific to these TBIs include worsening headaches, seizures, balance issues, and unusual mood swings.

TBIs are what are called closed head injuries. One should not forget open head injuries, which occur when some object, be it glass or a portion of bone, penetrates the skull. These, too, are seen with tragic regularity in high-impact collisions. They can make the brain tissues swell and press the brain against the skull (edema), build up pressure in the brain via a blood clot (hematoma), or lead to bleeding (hemorrhaging). Without immediate surgery, the consequence could be brain death.

We mentioned how the shoulder harness of a seatbelt could harm your shoulder and ribs. The lap belt may do damage, too, as the stomach, intestines, kidneys, bladder, and other internal organs can be violently moved inside the body upon impact. Internal bleeding is what one must worry about.

Initially, it will seem like a case of muscle strain with bruising, swelling, and pain. The injured area will be tender to the touch. Later, one may experience dizzy spells as well as notice blood in one’s stool and urine. Depending on the location of the injury, one may vomit or cough violently (the stomach is injured); become constipated (the bowels are obstructed); or become short of breath (the lungs or heart were affected). If left untreated, one may develop blood clots, suffer organ failure, and die.

One cannot ignore the emotional trauma that accident victims might suffer from. It could be anxiety, especially when victims get behind the wheel again, or it could be depression, particularly if victims lose a limb or incur permanent scars on the face where everyone can see them. It’s not uncommon for victims to suffer from post-traumatic stress disorder and be haunted by memories of the crash.

PTSD is not necessarily linked with the severity of a crash; whether it arises or not depends more on how the victim reacts to the situation. A highly emotional reaction, combined with a lack of outside support during the physical recovery, can raise the risk for PTSD. PTSD is characterized by continual feelings of:

It’s not just the vehicle occupants who can suffer emotionally; those who witness the incident may incur trauma as well. There have been cases of witnesses seeking compensation for their mental anguish. When the victims of a crash die, the family members will reel from the emotional shock but may be reimbursed for this in a wrongful death lawsuit.

Under personal injury law, you can be compensated for pain and suffering and emotional trauma even if it never reached the level of developing into PTSD. Called general damages, these losses are subjective, so putting a monetary value on them poses a special challenge. That would be where the testimony of mental health experts could come in.

PM Law Firm will evaluate your case and calculate how much you might recover in special damages, which includes vehicle repair or replacement costs, past and future medical expenses, and the income lost during your physical recovery. Then, our car accident lawyers could factor in the above-mentioned general damages.

If you were partially at fault for your injuries, you could still have a valid claim though whatever amount you receive will be proportioned to that degree of fault, according to this state’s comparative fault rule. With us negotiating on your behalf with the insurance company, you may achieve the maximum settlement possible. To get started with a consultation, simply call us today.