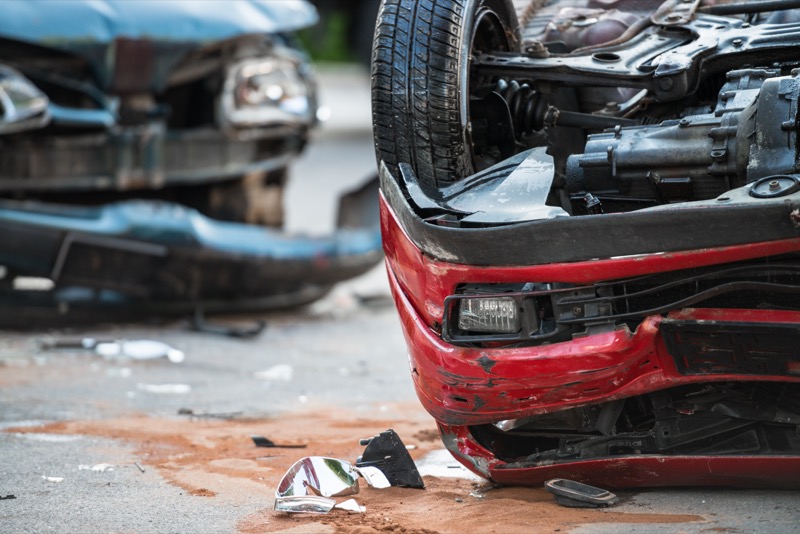 While cars have certainly transformed the country in regards to how far someone is able to live from their work, they have also increased the amount of danger on the road. Technology is often to blame for that as well. Car accidents can do more than just cost you a car. It can sometimes end a life or greatly impact someone’s life to the point where their lifestyle is altered. To become a more aware driver and improve your safety on the road, consider these 27 most common causes of car accidents.

27 Most Common Causes of Car Accidents

Another aspect that often causes car accidents is rain. Sometimes drivers find that their windshield wipers suddenly aren’t working and they’re trying to see the road through a blurry and smeared windshield. In especially hard downfalls, the windshield wipers may not be able to keep up with the rain pelting the glass and the amount that the driver can see is extremely limited.

Whether you’re running late or you just have little patience, speeding is another huge culprit of car accidents. It’s easy to miss something when you’re speeding and suddenly find yourself with little space or time to react appropriately in case you need to slow down or stop. It can also endanger other drivers.

Similar to rain, when visibility is lowered, the chances of having an accident are increased. For those who drive at night, their vision is extremely limited. It is harder to see potential obstructions in the road like dropped furniture or animals. Pedestrians are also harder to see.

While everyone needs to learn how to drive, teenaged drivers are often the cause of car accidents. For one, they just lack a general amount of experience. They might crack under pressure when faced with a sudden stop or decision they need to make on the road. They can also be more prone to distracted driving and performing other actions that may increase their distraction level. Since teenagehood often brings with it a sense of feeling invincible, they are more likely to take chances on the road.

Another one of the biggest car accident causes is driving when drunk. With social drinking quite popular, it can be easy to take chances on the road with your friends encouraging you. You may not even feel that drunk. However, even if you are a little bit buzzed, your reaction time is severely lowered. When you’re faced with having to take a sudden stop, you might find that you lack the ability to do so.

Whether they feel as though they’re running late or they just lack general patience for a few minutes, running red lights is more common than you might want to believe. It’s also an extremely deadly choice that drivers make. Running a red light doesn’t just affect those in the car itself but all those at that intersection. Pedestrians who received the crossing sign to cross may be killed or severely injured if someone runs a red light and hits them.

Another unsafe highway practice is lane changes. While it’s acceptable to change lanes in order to pass someone who is going below the speed limit in a designated area, it is less safe to do so in areas that are not permitted for lane changes. This is usually in areas where the driver cannot see the lane ahead of them further enough to determine if it is safe to change lanes. Hills, steep curves, and other obstructions may limit the ability of the driver to see ahead. On a highway, it may be unsafe because they underestimate how many cars are ahead of them and they’re forced to veer off the road in the event of hitting someone in the other lane.

Sometimes the fault doesn’t rest with the driver. There are times when the road was just designed poorly. With an increase in population in an area, the old road design may not work well with the increased use. Until the road commission chooses to fix the problem, drivers will likely continue to have problems in those areas and accidents will continue to occur.

Another popular cause of car accidents is tailgating. This can be a habit that is difficult to break. If someone is going slower than the speed limit, you might feel tempted to drive up on them and encourage them to move along at a faster pace. While this may work sometimes, it also comes with a risk. It is possible that they are also following someone slow and you’re riding their behind isn’t helping matters. In the event that there is a sudden need to stop, you’re not going to have enough distance to stop abruptly without ramming into the back of them. For many insurance companies, it is often the fault of the one who rammed in the back of the car rather than the person who was going below the speed limit or stopped abruptly.

Whether they mistook the sign or just don’t care, some drivers end up going in the wrong way lane. This can be common in cities where one-way streets aren’t properly labeled. Wrong way lanes are basically either used for certain vehicles or consist of traffic that is going in the opposite direction that you are going. This can lead to a potentially lethal head-on collision. The best way to avoid this is to carefully examine road signs before making a turn.

When drivers miss an exit or turn, they may choose to make an illegal turn in the middle of the road. Sometimes this turn can be quite abrupt and cut other drivers off. For those who make an improper turn on the highway, it can cause a slowdown which can force other cars to run into the backs of each other. Even the use of a turn signal may not help to thwart the problem since other drivers may not understand that you’re making an improper turn. While it may be tempting to just turn around if you miss your turn or exit, you should just drive the extra mile or mile so and turn safely instead.

Among the most common car accident causes is the use of drugs and driving. Similar to drunk driving, those who take drugs and then drive likely don’t feel that they are inebriated enough not to be able to drive in the first place. Unfortunately, this can be a costly decision. Depending on the drug, the effects can be either quite obvious or not obvious until you need to make a sudden decision.

Road rage is an actual condition that many people cannot seem to control. While everyone might experience a bit of irritation on the road, there are times when a driver is consumed by their rage. This can cause them to react poorly in a situation. They may choose to ram their car into their target or take some sort of other aggressive action that can hurt them and those around them.

For those areas that see snow, this is a culprit that is a common cause for accidents. The slippery conditions can make those who aren’t used to driving in them end up slipping off of the road or running into other cars. Blizzards, especially, can be a dangerous situation. They can create a white-out which essentially means that it is almost impossible to see anything on the road. Instead, the white snow creates a blanket that can make cars not see each other. It can even be difficult to see the road.

With snow often comes ice. While snow may be more of a culprit of blinding the driver, ice is primarily responsible for making it almost impossible to drive on the road. Even with good winter tires, sometimes it isn’t possible to achieve traction. Cars can slip off of the road or slip into other cars. They may be unable to stop or go and can wind up slipping right into traffic.

Through no fault of their own, it is sometimes possible for an accident to occur because the tire has blown out. This can be a scary situation that can affect far more than just the driver of the car and its passengers. If a car blows out, it can make the car abruptly jerk into traffic or spin out. This can cause other cars to run into them. Or, in the event that the tire does not end up rolling off of the road, it may sit on the road and cause other cars to run into it.

Potholes are a bane for many states. Particularly bad potholes can do serious damage to a car. It may break parts off or cause tire blowouts.

Another common cause of car accidents is when a driver is tired and still gets behind the wheel. The rhythmic motion of the car can cause a person to drift asleep. They may veer off of the road and hit someone or run into something themselves.

Animal crossings are another common reason for car accidents. Whether it’s at night or day, if an animal decides to cross into the road, it can be difficult to avoid the collision. This can cause serious damage to the car and those within it.

In keeping with environmental hazards, fog can be just as deadly as snow or night. If it is dense enough, it can be hard to see other cars and animals on the road. It can also be difficult to see stop signs.

In some cases, the road may have an abrupt curve. If you’re going too fast, you may not turn in time and you can either go off of a cliff or into the area off of the road.

Whether it’s just out of fun or ego, street racing can lead to accidents. Friends who decide to race one another might end up finding themselves in an accident instead.

Just like running a red light, if you run a stop sign, you can also wind up in an accident. Although you may not be stopping, that doesn’t mean the others are going to stop for you.

If something falls in your car and you hear it rattling around, you may be tempted to reach down and pick it up. This can cause quite the distraction and remove your eyes from the road. Those items may also roll under the brake pedal and render braking impossible.

For those who travel with loud passengers, you’ll likely find that you are more distracted when driving. Turning and talking to the passengers in your car could result in an accident.

One last common cause of accidents involve those who are running from the police. This car chase can cause quite a few accidents as the one being chased makes desperate decisions on the road. During a police car chase, anyone can become a victim. It’s best to stay vigil.

So what should you do after you get in a car accident?

Need Help With a Car Accident?

The car accident lawyers at the PM Law Firm can answer questions and get you the compensation you deserve.